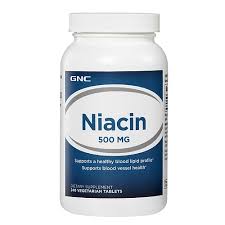 Whether or not niacin for cholesterol reduction is a good idea has been the topic of much research over the past few decades.

The link has been clearly established, and studies show that it may help reduce your chances of developing heart disease, as well as help treat an existing heart condition. As such it’s worth looking into as an option for you.

What is niacin and what heart benefits does it offer?

Niacin is a member of the B family of vitamins, which are important for the heart specifically as well as many other bodily processes. It is also known as Vitamin B3 or nicotinic acid. The main function of niacin is to metabolize fats. It has a three prong effect in regards to reducing your risk of heart disease:

1) Niacin has been shown to lower LDL (bad) cholesterol levels.

2) Niacin has been shown to lower triglyceride (fat) levels.

3) Niacin has been shown to raise HDL (good) cholesterol levels.

Niacin has been widely used to help reduce the risks of heart attacks as well as to treat diabetes and prevent cataracts.

Niacin to lower cholesterol – What do the studies say?

According to the Coronary Drug Project, 1,119 men who had survived a heart attack were given niacin and compared with a larger control group. After six years, total cholesterol was 10 percent lower. Nine years after the study, total mortality in the group that had received the drug was still 11 percent lower than that of the control group. (Canner, et. al. 1986)

More recent studies have not been that favorable concerning niacin’s role in reducing the risk of heart disease. One funded by Merck studying the effect of a pill containing extended release niacin showed that it did not prevent the occurrence of heart attacks and may also lead to diabetic complications and increased bleeding.

Critics of this latest study cite design flaws in the study which may have skewed results. There was also another drug present called laropiprant that prevents flushing of the face, which is common with niacin therapy. It is possible that the presence of this other agent altered the outcome of this study.

Along with the positive and negative, there are those that are mixed in their opinion of using niacin for cholesterol. The Mayo Clinic says that niacin can increase your good HDL, but the side effects, including stomach upset and bleeding, might outweigh the benefits.

What is the recommended niacin dosage?

Before we discuss the niacin dose for cholesterol, it’s important to be aware of two things: 1) Never start niacin therapy without medical supervision, and 2) It’s important to choose the right form of niacin.

An initial niacin dosage of 250 mg is typically recommended, and a “hot flush feeling” is very common, and short-lived upon supplementation. Over time this dosage can be increased based on the desired results. For raising HDL and lowering small LDL, doctors will typically recommend 750-1000 mg per day. For regular LDL, it can be up to 5000 mg per day depending on the severity of the problem.

Again, you should never take niacin, especially in higher dosages, without your doctor’s OK, as it can cause some very serious side effects in some individuals.

So is niacin a good choice for lowering cholesterol?

The answer to that question is not cut and dried. There are doctors who have been prescribing a daily niacin dose for cholesterol for years who swear by the treatment as both effective and necessary. Others will take the results from these latest studies at face value and shy away from prescribing it to their patients.

The bottom line is that niacin therapy is likely right for some people and wrong for others, depending on their particular situation. Your best bet is to talk to your doctor/cardiologist and see if it makes sense for you. If you are currently on niacin and experiencing any flushness or other symptoms, consult your doctor and perhaps look into alternatives for lowering cholesterol.

Where do you get niacin from?

Niacin is found in meat, beans and dairy products. Although you can get a full supply of B Vitamins from your diet, if you have poor eating habits or are a strict vegetarian you may be vitamin deficient. Unfortunately with today’s processing methods, most of the important nutrients in the foods we eat are depleted or removed altogether. So in many cases it makes sense to supplement niacin and other important vitamins and minerals to be sure our body’s get what they need.

Are there any side effects or precautions?

Niacin side effects are generally mild. The most common reaction is itching and flushing of the skin. However, niacin can increase blood sugar levels and elevate liver enzymes, so diabetics and patients with liver or kidney problems should take extra precaution. As with all supplementation, make sure you consult your physician or qualified medical professional before you take niacin for cholesterol or any other purpose.

Xtend-Life Lipi-Rite is a safe, effective way to balance your cholesterol levels naturally!